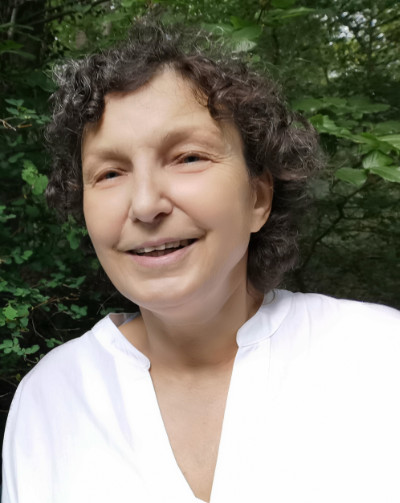 Sibylle Pomorin (*56) was already working as a guitar teacher at a private music school at the age of 15. From 1975 until 1980 she studied flute and saxophone at the Staatliche Hochschule für Musik in Münster, Germany. At the same time she played in chamber ensembles and jazz groups for which she also composed.

In 1984/85, she studied composition under Ernst Bechert in Hamburg, Germany and in 1994, she received composition lessons and an introduction to electroacoustic music from the American composer and electronic musician Alice Shields during a six-month stay in New York.

Between 1982 and 1994 she toured with improvising musicians of the international scene and toured with her own groups and compositions through Europe and Israel.

Since 1986, she lives in Berlin, the German capital, as a freelance-artist and composer.
She received composition commissions for ensembles, festivals, broadcasting, and theatre as well as numerous prizes and awards (inter alia the SWF Jazz Prize and the first prize at international composition contest Soundscapes voor 2000 in the Netherlands) and was promoted by various working scholarships - inter alia in New York, Istanbul and Iceland. Scores publications and CD releases inter alia by Moers Music and in the Furore Verlag. Co-operation with musicians of the international improvisation and avant-garde scene.
In 1992, Bavarian Television broadcast a film portrait of the artist ("Neue Töne aus Berlin", portrait of the musician and composer Sibylle Pomorin by Carla Kilian).

Since 1994, studies and productions in the studios of the Columbia-Princeton Electronic Music Center in New York, the Center for Art and Media in Karlsruhe, Germany, the Electronic Studio of the Technical University of Berlin, Germany, and the Nederlandse Programma Stichting in Hilversum, Netherlands, and in her private studio.

Her music has been performed at international festivals for contemporary music in Europe, Israel, Mexico, Australia, Canada, Georgia, Japan and the USA.